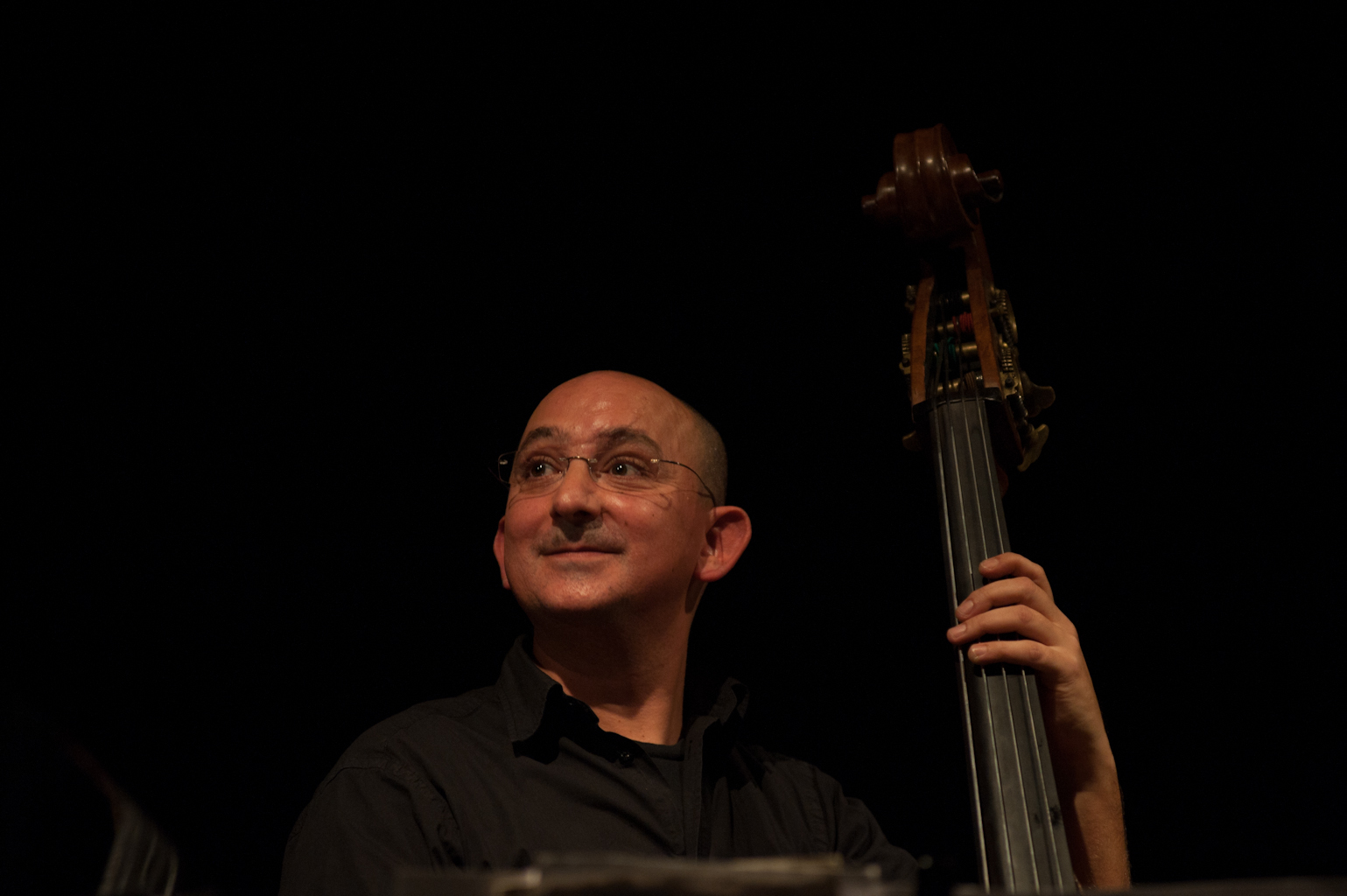 DANÇA DOS DESASTRADOS After released “BRANCO", the group´s debut album, in 2013, and the album “A VIDA DE X”, in 2016, Quarteto, led by bassist and composer Miguel Ângelo, now promotes the third work of the quartet - “DANÇA DOS DESASTRADOS”. Based on possible Traditional Dances, real or imagined, this is the proposal of the music group to listen, feel and dance, even for the most “clumsy”. About the digital project The arts complement each other, intersect, run over each other and in conjunction allow for new achievements and realities. For this reason, the double bassist and composer, who is also a computer programmer, allied himself with the graphic artist Maria Mónica, author of the album´s cover and, from the music and cover of the album, created a new digital “autonomous” world, game, landscape and / or virtual reality so that music, design and technology enhance the sensory experience of the listener / interlocutor (a). Create your world HERE. More info!. Buy: Bandcamp | Spotify | ITunes With the support of Fundação GDA.
MAU MAU (Miguel Ângelo Utopia) is the new project led by double bass player Miguel Ângelo. MAU is composed by: Miguel Ângelo - Doublebass, Miguel Moreira - Guitar and Mário Costa - Drums. UTOPIA is the title of this MAU trio´s debut album. You can listen and buy it here!

LAND
MAZAM (2020) In his most recent original project, Mortágua explores the characteristics of the quartet with piano, joining an emblematic rhythmic section, in favor of a fresh and refined product. Without filters, you cry the sorrow of the seaside and laugh in the face of joy on the mountain. This space is made of everything and nothing. It is not, MAZAM.

The bassist and composer Miguel Ângelo returned to the albums in his own name with a new project, MAU - Miguel Ângelo Utopia. In this work, and starting from the great work of Englishman Thomas More, the musician assumes an attitude of intervention and counterpoint in the face of the current political panorama. In a long conversation, jazz.pt wanted to know what is on your mind. (by António Branco). Read it here!
MAP + CHRIS CHEEK
PEDRO NEVES TRIO In December 2018, MAP did a small tour with the great sax player Chris Cheek. From the live concerts we have compliled the best moments and did a great album. Beside playing the double bass, i have mix and masterized the album. More info! Murmuration it is the Pedro Neves trio new album. It is one of the most beatifull albuns i have participated. Beside my function as bass player i did the recording, mix and master of the album! More Info!
I THINK I´M GOING TO EAT DESSERT
Miguel Ângelo Solo (out 2017) Creative Sources Records I think I´m going to eat dessert refers to that moment after the main course, in which we have to decide whether to eat that additional dish which, although it is dispensable in nutritional terms, it is justified only by the pleasure of satisfying our need for sugar or additional taste sensations. This album is a bit of this, they are mostly moments of pure improvisation, unrepeatable, which, for me, make musical and emotional sense.
A VIDA DE X
Miguel Ângelo Quartet "A VIDA DE X" consists of ten compositions inspired by fictional characters or imaginary or real stories that the quartet gave life and hopes that each listener create his own vision and this way, X gets a new life. Besides music, the CD contains a book with an illustration by theme. The illustrations are by Maria Mónica (5:10), José Rui Coelho (2, 3, 6 and 9) and Inês Coelho (1, 4, 7 and 8). "A VIDA DE X" is not a simple life is a tangle of them! ...
«Miguel Angelo creates amiable environments, hanging on solid frames to be colored with both crisp and curved brushstrokes in the company of his bandmates.» @ JazzTrail by Filipe Freitas Ler aqui a review
4o Festival Porta-Jazz A great party, great quality music, public and a great atmosphere. I attended the concert with my quartet music from the album BRANCO and the world premiere of Super Modern Ensemble and beautiful debut was. See the report of jazz.pt.
Nice December! December is generally pretty, for those who enjoy the spirit of Christmas, or just party, hugs and kisses. This year will be even better to me. December will be released a record that I am very proud. A beautiful trio like someone I know says "the best trio of street moreira" ... a trio with the pianist and friend Pedro Neves and Leandro Leonet on drums... it's gonna be beautiful. The 7 release from Carimbo porta-Jazz
Release concert at
Museu Vivo da Fogaça and Contrabaixo Bar Two beautiful nights in two beautiful spaces (Museu vivo da Fogaça - Contrabaixo Bar - Mira), where the songs won another dimension. At Museu vivo da Fogaça a composed house, in a very beautiful (upright piano ) and a beautiful concept, provided the perfect conditions for a beautiful concert, thank you to those who were there, and in particular Moisés! At Contrabaixo Bar in Mira, the night was "unhinging" energies to 100%, with an attentive and connoisseur audience, was just fantastic. Thank you Chico!! Here is the video of the theme TEMPO on Contrabaixo: Algumas fotos, cortesia do Jorge Vidal!
Release concert at FEUP October 3, 2013 is another day saved in my bank of beautiful memories. Full House, a beautiful public, good environment, everything that is needed for a good concert. And, at least for us group, it was a fun and judging by the reactions to the public too ... So to all those who were present at the commission's cultural FEUP, Dr. Luis Melo and Paul Vasques, thank you ... VOLTAS? | JÁ NÃO VOLTAS @ FEUP Podem ver as fotos aqui, cortesia do fantástico Amaral Moreira
Carlos Azevedo Quartet Carlos Azevedo is one of the most fantastic Portuguese composers, with compositions in the fields of jazz and classical music. Carlos Azevedo, piano and compositions Miguel Moreira, guitar Michelangelo, double bass Mario Costa, drums
Miguel Ângelo Quartet The quartet consists of João Guimarães on alto saxophone, Joaquim Rodrigues on piano / rhodes and Marcos Cavaleiro on drums, plays original music of bassist serving as starting point for the union of the different sensitivities of the musicians who make up the quartet.

«...visit the circus imagery in his new ´Circo Voador´, and does so not only escaping the stereotypes you would expect when it comes to this subject, such as introducing some rather intriguing elements..» @ Jazz.pt by Rui Eduardo Paes Rui Eduardo Paes wrote about MAP new cd ´Circo Voador´ at jazz.pt magazine. http://www.jazz.pt/ponto-escuta/2016/01/18/map-circo-voador-carimbo-porta-jazz/
«Gran disco que forma un todo...» @ lahabitaciondeljazz From Spain: http://lahabitaciondeljazz.blogspot.pt/2015/12/map-cd-circo-voador.html